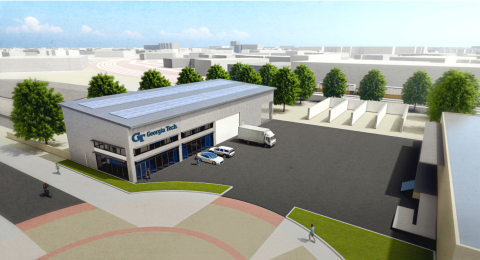 2022 has been a pivotal year for Infrastructure and Sustainability (I&S), the unit behind many of the campus improvement projects under construction on the Georgia Tech campus. I&S welcomed its first vice president, Maria Cimilluca, in January; integrated the Office of Capital Planning and Space Management into the department of Design and Construction; and appointed Gilbert Delgado as the assistant vice president for the newly created department of Planning, Design, and Construction. With this strengthened leadership and renewed vision, existing construction on campus forged ahead, new projects broke ground, and design work for future transformative projects continues.

COMPLETE OR SOON TO WRAP UP

Campus Center
The John Lewis Student Center and Stamps Commons opened the week of August 1. As part of the Campus Center Project, this final phase consisted of the renovation of the original part of the Student Center building, the addition of a brand new three-story building in place of the original Stamps Commons, and upgrades to the Kessler Campanile and its surrounding plaza.

The iconic Campanile and surrounding plaza are being reconfigured to improve the accessibility around the site. Its water feature will be updated to become more sustainable so that beloved campus traditions that occur in that space can safely continue. These improvements are on track for completion later this fall.

10th Street Electrical Substation Improvements – Phase 2
Improvements have increased the electrical resiliency of the plant by upgrading its four electrical substations to protect capacity required for campus cooling. This electrical substation powers the 10th Street chiller plant that provides chilled water to the campus and currently operates 24 hours a day, 365 days a year. Originally constructed in 1995, the plant has been expanded and currently houses seven chillers with a total capacity of more than 15,000 tons.

828/830 West Peachtree Demolition
The demolition of two buildings along West Peachtree is complete, and the space is currently being used for campus parking. During the fall semester, the space will house food trucks and serve as additional parking for gameday visitors.

Howey Physics – Lecture Hall 5 Renovation
Following the successful renovation of the four large lecture halls in the building, Lecture Hall 5 is now complete. Flexible seating was installed along with new windows to allow daylight into the revitalized space.

Ramblin’ Wreck Garage
Constructed to house and display the Institute’s mechanical mascot, the nearly all-glass structure with showroom-quality lighting and rooftop solar array will foster community spirit in the heart of campus. The garage houses a tool bench, vehicle turntable, and lift for students to maintain the Wreck. Located near the Campus Center and the Campanile Plaza, the garage will showcase the Ramblin’ Wreck and offer outdoor programmable space. The Wreck will also be in a direct line of sight from the Little Theatre in the Student Center, where prospective student tours depart, reinforcing the connection between the students and Georgia Tech’s rich traditions.

Gilbert Hillhouse Boggs Building Electrical Project
This resiliency project will replace the existing network transformers, panels, and switchgear that support the electrical distribution systems throughout the facility that houses laboratories and offices spaces for the College of Sciences. The upgraded system will increase preparedness and the ability to respond to electrical disruptions. The expected completion date is May 2023.

Access Control Upgrade
In progress since 2015, the implementation of a single, campuswide physical access control service is planned for completion by the end of the year. The scope of work includes the replacement of existing access-control hardware systems for an estimated  4,000 entrances to academic buildings, research space, and athletic facilities.

Community and Chefs Garden Expansion
The Community Garden, located on the east side of the Instruction Center, will be upgraded to add accessible pathways and garden plots as well as increase the number of individual plots. The installation of cooking instruction tables and facilities will allow for chef demonstrations. More trees will be planted in the orchard area, and there will also be the installation of a new composting area, shed, and fencing. This project is scheduled to be complete in October.

Science Square
Twenty acres of mostly undeveloped land just off North Avenue near Northside Drive will be transformed into a new research community. Science Square will expand the biotech and life science research space and help revitalize and nurture new opportunities on Atlanta's west side. A 13-story tower will feature labs, clean rooms, and research space as well as retail space and affordable housing. A $500,000 grant will kickstart job training so people in this community will be able to learn, work, and research here. Science Square is slated to open in 2024.

Aerospace Engineering Aircraft Hangar
The Aircraft Hangar facility is proposed to be in the North Avenue Research Area (NARA) adjacent to the Techway building complex. This project will primarily focus on creating a facility to house small aircraft for the Daniel Guggenheim School of Aerospace Engineering research. The facility will be approximately 10,000 gross square feet and consist of two floors. Design planning is underway.

D.M. Smith Building Renewal
Renovations will include several upgrades to the building’s infrastructure, including strengthening compliance with the Americans with Disabilities Act of 1990 by creating a permanent wheelchair access feature and adding an elevator. New mechanical, electrical, and plumbing systems will increase occupants’ health and comfort, as well as the building’s energy efficiency. A virtual lab and hoteling spaces will be created for members of the School of Public Policy. The outer structure will remain largely intact, and all proposed changes will respect the historical character of the building. Renovations to the building are planned to begin in late 2023 and conclude in Spring 2025.

Georgia Tech Veterans Walk of Honor
Located outside the Veterans Resource Center, this tribute project will honor all Georgia Tech alumni, students, and staff who have answered the call to service in the United States armed forces. The walkway leading to the Veterans Resource Center will feature granite inlays and mounted wall plaques recognizing the six branches of the armed forces. Each inlay will include a portion of morse code representing the branch’s slogan, encouraging discovery and reflection. Adjacent elevated signage will display the core values of military service: honor, courage, commitment, respect, duty, valor, service, and integrity. An upper plaza reflection area will feature an American flag and overlook Griffin Track and McCamish Pavilion, with the city skyline in the distance.

Student Athlete Performance Center
The 115,000-square-foot facility will be built in the footprint of the current Edge/Rice Center in the northeast corner of Bobby Dodd Stadium. The Center will house strength and conditioning, nutrition, sports medicine, ticket sales, and academic support. It will also include new expanded space for Georgia Tech football, featuring a dedicated football-only strength-and-conditioning area, players’ lounge, and meeting spaces. The student-athlete performance center will also include premium seating for Georgia Tech football games and other events held inside Bobby Dodd Stadium. The estimated completion date is early 2026.

East Campus Streetscape
Renovation of sidewalks and roadways will improve pedestrian and cycle access, safety, and connectivity to the east side of campus and Tech Square. Current sidewalks, curbing, and roadway paving will be improved. Designs are underway with phased construction planned for next summer and full completion projected for Fall 2024.

Ferst Drive Realignment and Cycle Track
Realignment of Ferst Drive at Regents Drive will allow the elimination of the traffic signal and enable connectivity to the planned bicycle infrastructure southwest of campus. A cycle track will be installed along Ferst Drive, providing improved safety and separation between cycles and buses at the bus stops. This project is also in the design phase, with construction planned for next summer. 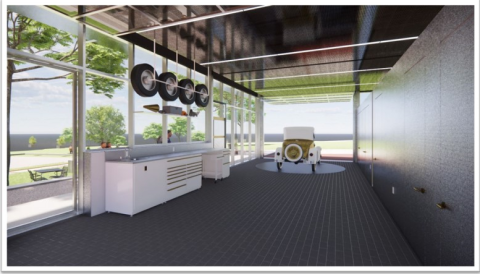 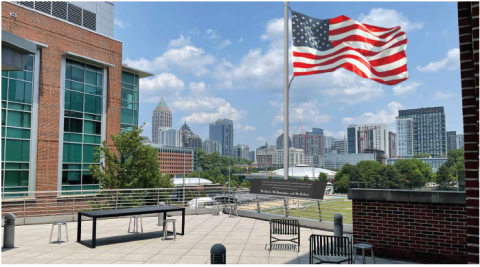 In addition to the larger and more visible projects featured here, there are more than 150 smaller projects in progress across campus. These include roof replacements, HVAC upgrades, and chilled water line connections. A great number of projects also take place inside campus buildings such as classroom and academic office renovations, lighting improvements, restroom upgrades, floor replacements and lab fit-ups.